Articles + Tips In the Aftermath of the Unthinkable

On Sept. 13, Hurricane Ike made landfall in Texas, tearing through Houston and surrounding areas with brute force, leaving destruction in its wake. Among those affected by Ike were many couples whose wedding dates happened to coincide with the hurricane’s devastating onslaught, along with countless venues and vendors contracted to provide services for these weddings. Despite the damage and uncertainty wrought by Ike, determined brides and grooms found ways to make their wedding dreams a reality, while dedicated wedding professionals—including those at Weddings in Houston, who aided brides in rescheduling their nuptials, and offered vendors displaced by the storm use of their offices—rallied to their assistance. Here are a few inspiring first-person accounts of Hurricane Ike experiences, as told to Weddings in Houston in the immediate aftermath of the storm.

CRYSTAL FLORES-HENDRIX, BRIDE
“We were scheduled to get married on Sept. 13—the day Ike hit. On the morning of Thursday, Sept. 11, we heard the latest prediction that Ike would hit between Galveston and Corpus Christi, leaving Houston to most likely to be affected by the ‘dirty’ side of the storm.

After much crying and talking to family and friends we decided that if we moved the wedding up one day to Sept. 12, we would have time to have a smaller but nice ceremony before Ike. As we contacted vendors and the morning progressed, we decided it would be too dangerous for any of our family to continue to travel to the Houston area. We went ahead and completely canceled the wedding for the weekend with the hope of rescheduling for Sept. 20.

Being the organized person that I am I decided that we should get our marriage license shortly after 30 days before the day we were to get married. So with Ike pushing the wedding our license would have expired the 20th of September. Both of us live in the greater Houston area, but we decided to stay in The Woodlands with my fiance’s parents to ride out the storm. My fiance’s mom’s best friend from Texas City had to evacuate, so she and her family were also staying along with us. The friend’s husband happened to be a pastor, so we decided to take our marriage license and rings with us just in case we decided to go ahead and become husband and wife.

And we did just that. He married us officially at 12:45 a.m., Sept. 13, right before Ike made landfall. We wanted to do the small ceremony outside, but it was so windy and rainy that we made a makeshift in the doorway of his house complete with a cake my fiance’s mom made and champagne we bought at a convenience store before everything closed!

We have rescheduled the ‘big’ wedding for Oct. 4, so that we are still able to celebrate this time in our lives with all of our friends and family. Ike did mess some things up, but we made the best of it and we can always say, ‘We got married in a hurricane!’”

ASHTON GARDENS
“We re-booked 25 displaced brides from two venues in the Galveston area and have several more that we are working with. With one ballroom and one chapel, that was record-breaking for us! For Brides in 2008, we have waived all rental fees and are only charging them for food and beverage, and we have also allowed them flexibility on their deposits and payments. For weddings in 2009, we have been working with budgets and setting up proposals and pricing for our low season versus charging them full high season and again helping out with deposits and payments.

All of our new brides all have something in common: They are completely distraught and out a lot of money. At Ashton Gardens we are all-inclusive so it’s easy to quickly your wedding with us. we have been able to make it as stress-free and financially feasible as possible for them to plan everything again.”

DAWN DRURY, BRIDE
“Ike has been changing our plans since before the storm even arrived. Brett (my fiance) was scheduled to take a trip to Las Vegas for his bachelor party the weekend Ike hit but wasn't able to get out of town because flights were canceled.

Our wedding reception was originally scheduled on October 25, at 7:00. A couple of weeks ago, my mother and I were shopping at the Galleria for wedding shoes when I received a call from the lady that was preparing my wedding cake. She broke the news to me that my wedding reception was ‘cancelled’ and that the money we paid in full for the 225 guests was lost because the venue is supposedly filing for bankruptcy.

I was initially very upset and got on the phone immediately to tell Brett the news. He is an attorney and it is in his nature to find out all the facts up front, so he drove immediately over to the venue to see if he could get more information. The place was obviously severely damaged by the storm. His response when he got to my apartment was, ‘Well, we’re still getting married.’ Immediately, this put me in a better mood because I knew everything would work out.

The outpouring of support for us has been amazing. Venues are going out of their way to try and accommodate us and I think stories have been the same for all the other girls in my situation.

Brett’s very close family friend owns a ranch in Hempstead. We have decided that given the amount of time left to plan the wedding, we are going to have a very intimate family ceremony in the country, which I think will be beautiful.

On another note, the shop that was storing my wedding dress also sustained damage from Ike as well. Many of their sample dresses were destroyed but luckily my dress was spared. Also, I have had to reschedule my bridal portraits three times because my hair salon was without power until late last week. All the changes have actually become a running joke!”

EN VOGUE EVENTS
“My clients, Amanda and her fiance Tim, were planning their wedding at Chateau Polonez for Sept. 13. We all watched as the hurricane neared. Then Thursday we realized there was no way we could expect all of their friends and family to travel with the storm looming. On Thursday evening, Amanda’s fiance turned to his almost-wife and asked her if she wanted to wake up married on or postpone everything.

They decided that the whole point was to start their life together, so they did a quick ceremony at Prince of Peace church on Friday morning before the storm came. They turned their rehearsal dinner, scheduled at a hotel for later that Friday, into a mini reception, holding it at lunchtime instead of the originally scheduled dinner, because the hotel was going to house people evacuating from the hurricane. They found a cake vendor, who had sitting around from the other canceled weddings, but was not far from the rehearsal dinner site, so she got the bride’s colors and made a beautiful wedding cake. The florist was able to drop off all the flowers—which were originally made for a reception size of 300—so there were flowers everywhere.

There was a little boy staying at the hotel who was celebrating his birthday, so our bride and groom shared their wedding cake as a birthday cake. Now they are enjoying their honeymoon, as a married couple. Upon their return, we will be doing a ‘reenactment’ of the ceremony and then having the big blow-out reception on Oct. 25 at Chateau Polonez.”

MIKELLA MONROE, BRIDE
“It was early spring when my fiance Rob and I set our September wedding date. We considered that we might be tempting fate by picking the 13th, but the date worked for so many guests because we’d originally considered Labor Day weekend for our wedding and many people had prior plans. Since Rob and I live in Seabrook and his dad had been the harbor master at Lakewood Yacht Club in Seabrook, we decided that it was the perfect spot for our outdoor wedding ceremony and reception. We made all of our plans like any other couple, picking attendants, cakes, the minister, and our attire, and planning all of the details down to the letter. We had 130 guests RSVP, some traveling from both the east and west coasts. As Labor Day weekend approached and storms were brewing in the Gulf, we found ourselves relieved that all we had planned for the weekend were our bachelor and bachelorette parties instead of our entire wedding.

Since Seabrook was looking to possibly be hit hard by Ike, Rob and I decided to look into what our plans would be to evacuate. Our honeymoon had also been booked since the spring, but we agreed that the likelihood of catching a flight to San Juan on Sunday morning when Ike was scheduled to hit on Saturday was not favorable. But if we could fly to San Juan a few days early, maybe we could still catch that cruise ship leaving that Sunday evening. After many calls to the airline and checking into booking a hotel for two nights, I had everything arranged to fly out at Friday afternoon. I was sad to not be having my wedding, but still taking the honeymoon seemed like almost a fair compromise.

We spent that morning boarding up our house and packing and then we hit the road that afternoon. We listened to talk radio all the way across town as we sat in traffic on the Beltway and already hearing about the air-ports closing on Friday, but they said that IAH was closing at 2 pm so we thought that we were in the clear. I already was using my cell phone to try to call the airline to verify our flight, but I only got a busy signal.

By the time we checked into our hotel on Houston’s north side, my sister was calling to tell me that our carrier was shutting down flights at noon. I used the hotel lobby’s computer to check the status and sure enough, the flight was canceled already. We checked out of our hotel room that night and drove to League City to stay with Rob’s mom since she was planning to weather Ike at home.

We all know how the story goes after that; Ike came to our little town on what would have been my wedding day. I joked as we sat at my future without electricity that we should have used the Internet to get her ordained the day before so that we could put that license to use and still keep our September 13th wedding date. And now, , we are working to reschedule our wedding.

We feel very fortunate that our home only had damage to the trees in the yard and fence so we can focus on replanning the wedding and honeymoon. So far all of the vendors have been working with us on picking a new date and we hope to hear wedding bells in November. But we’ll certainly never forget the day we almost got married.” 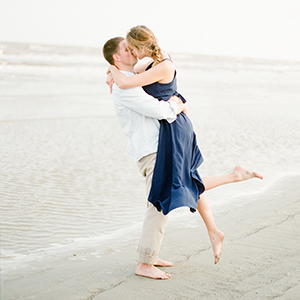 4 Tips for Planning Your Perfect Honeymoon 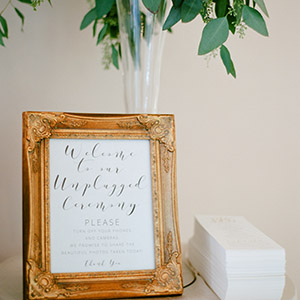 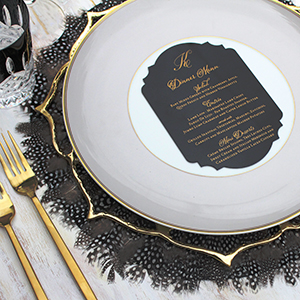