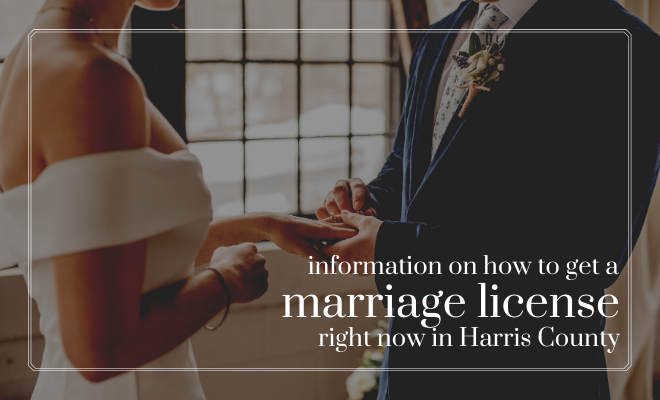 Harris County will begin issuing marriage licenses again on May 18 by appointment only. Here are some helpful tips and information for our brides and grooms looking to tie the knot in the coming weeks.

END_OF_DOCUMENT_TOKEN_TO_BE_REPLACED

If you’re used to loading up on the latest bridal mags, Houston bride, your load just got a little lighter. That’s right, last week brought the news that publisher Condé Nast will cease publication of Modern Bride and its sister magazine Elegant Bride.

We’ll miss the two mags’ timely features on fashion, reception décor, floral design, planning and more. But we at the
Houston Wedding Blog and Weddings in Houston magazine plan to work that much harder on seeking out the latest discoveries, tracking the most popular trends and bringing you the absolute best in EVERYTHING wedding from Houston and beyond.

New to the blog? Check out some of our most popular recent posts, like these great items on
Indian weddings, or this roundup of our favorite head-to-toe beauty finds. Searching for the perfect wedding shoes? Have a look at either these or these lovelies! Plus we’ve got handy tips on how to handle
kids at your wedding, figuring out whom and how much to tip, when and where to get a wedding license in Houston, and much, much more.

For those of you who love the heft and high-gloss inspiration of an honest-to-goodness print magazine (and what bride doesn’t?), the new issue of Weddings in Houston hits newsstands in January. Look for all your favorite departments and features, incredible photo spreads featuring the latest in gowns, cakes, floral and more, plus the most comprehensive guide to Houston’s ceremony and reception facilities (including information on size and capacity, rental fees and available services).

Hey Houston bride with the wedding in the works—you got a license for that thing?

If you’re planning to get hitched in Houston, you’re going to need a marriage license from the Harris County Clerk’s office. To get one, you and your fiancé will need to pay a visit to either the main office, or one of numerous branch offices.

Here’s what you need to know before you go:

•    You need to purchase your marriage license at least 72 hours, but no more than one month, before the date of your ceremony. The license expires 30 days after the date on which it was issued, if the ceremony has not been conducted in that time. The 72-hour “waiting period” is automatically waived for military personnel, who can get married as soon as they have their license (though they’ll need to show military ID at time of license purchase).

•    To purchase a marriage license, you need to bring a valid ID with you to the county clerk’s office (driver license, DPS ID card, passport, resident alien card or other government-issued identification).

•    The fee for the license is $71 (a bargain, considering it’s for a lifetime of wedded bliss).

•    Once you have your marriage license, you’ll need to be married by someone authorized to perform marriage ceremonies in Houston.

They do NOT include:

–Friends who owe you a favor
–The guy who dresses as General Sam Houston at the annual San Jacinto Day Festival & Battle Reenactment
–Your beloved Labradoodle, Mr. Snickers

So put that visit to the county clerk on your calendar (no less than three days, no more than 30, BEFORE your wedding day), and make a date of it—a romantic lunch for two, a stroll and a signing of the document that makes it official in the eyes of Houston, Texas and everywhere else.